Show 'em how big your brave is 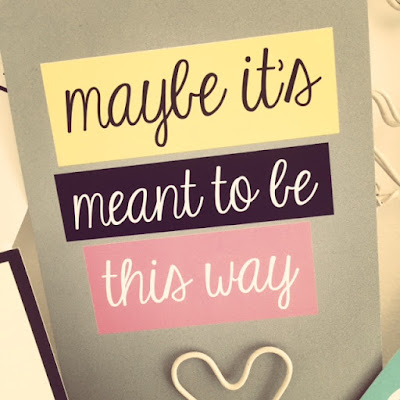 "And then there are days when you just put one foot in front of the other."

Or so a friend told me in what was one of my scariest hours. I’d just left a long-term relationship, and the most security I'd ever known. I was 29 years old and, prior to that wild time, I thought I’d “made it” in the love game. I thought I had my life planned out and found my fairy-tale. I thought I’d had my share of confusion and heartache. I thought that was done. But it wasn’t. Not even nearly.

The problem with assuming what’s in store, is that it leaves you extremely vulnerable to those times in life when your fate comes along and runs you all the way over. You're left standing there, looking around you at the rubble, asking a god you don't believe in what the hell just happened. This was NOT. IN. THE. PLAN.

BUT, if I have learnt anything this year, it is that the things we don't plan for are often the best things that can happen to us - sometimes it won't feel like it right away, we sort of have to learn it as we go, but sometimes it will be so glaringly obvious it's blinding. And we need to be brave in those moments, brave enough to just go the hell with it.

That was 6 months ago .I am still 29, pushing 30 really hard. Since then I have taken huge steps into new and unplanned territory.These are the moments when we learn how to be strong - really actually inherently strong. How to take a hard line with things even when you don’t want to. How to face up to what your heart is showing you, even if it’s terrifying. How to get on and live well, keep moving forwards and doing your day, despite how your world might be crumbling around you. Which it will, sometimes.

This year I surprised myself with my own strength (I didn't write all those pearls of advice in previous blog posts just for you guys, I drew on my own advice when I didn't expect to be needing it). What has helped me to be strong during times of great uncertainty has been total faith in my instincts and trust in the process of our wild world. But more than that, strength for me came in complete belief in myself and everything that I am. It doesn't matter what the detail of your life looks like, when you are the structure, you bring the essence of your own life, you are the absolute THING that is going to continue to carry YOU forwards in the life you create - nothing and nobody else.

Every day you’re given a choice; give in to the things that are bearing down on you – they will be many and often – or stand up and live. Stand up and push through with a smile and with faith in your future. Focus on the beyond now. Don’t imagine your life in too much detail, but have trust in it, because it will be more than you can even begin to comprehend right now. Good and bad. There is so much more than whatever your present looks like. So much more.
Even if right now you are having a day where all you can do is put one foot in front of the other - do that. Just do that.
x

p.s. I promise the next post is less emosh. Bare with me.