Last week I announced I was going to stay stone cold soba for the month of March. God damn me and my need to share, now I have to actually do it. At least I am one week down... 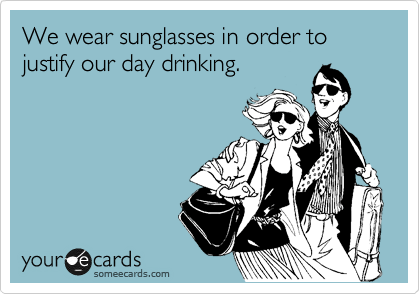 It’s pretty easy to not drink if you just don’t go out, provided you aren’t a raging alcoholic. So the point of my challenge isn’t to see if I can go without booze – I know I can, I often go weeks without drinking. What I want to do is challenge myself to not drink in situations where I otherwise would at least have a few or would struggle not to, so that long-term my natural reaction to social plans doesn't always have to be a slightly terrified “So the next 6 weekends I'm booked up being drunk and then hungover. Oh.”

Week One saw me stoically avoid wine, cocktails AND gin at a good friend’s birthday jamboree. JAMBOREE. It was an afternoon/evening event which made it easier to abstain, as I didn’t need to trick my body into thinking it had the energy to stay out until the wee hours. It was also made easier for the fact that I have some big weeks at work coming up, and I was knackered from the few just gone. When I remind myself that 8 hours on the sauce isn’t worth 5 days of an under-par work performance, it is much easier to stick to OJ.

How I found it

The first few hours were the hardest, because I LOVE getting drunk in the day. Probably more than I like being drunk at night. I love the buzz of a lunchtime glass of wine, and it was difficult to see the others order their first beer/gin while I started strong with a sturdy 1 pint of Diet Pepsi.

The first hour was also the most challenging because my not drinking was inevitably a talking point. I was happy to explain my reasoning, but it can be embarrassing when all eyes are on you and you are hoping someone will just go “great idea, I hope you manage it!” but instead you get suspicious looks. No, I am not up the duff.

After a bit, my not drinking became unimportant to the group, as it became apparent this would not mean I would talk/laugh any less...and they became too tipsy to notice anyway. Honestly, it did take me longer to relax into the conversation and I definitely missed the rosy bubble alcohol tends to form around such gatherings, but after a few hours I barely noticed the difference and as time wore on I realised I was enjoying myself just as much if not more than if I had been drinking all day, if mainly for the fact that I wasn't stressing about being hungover for the following day/week/month.

I also had much more room for FOOD and I was ready to capitalise on this. Like most people, when I drink I usually don’t realise I’m hungry, until about 3am when I’m suddenly ready for a full banquet. This time though, I decided if I wasn’t going to drink, I was damn well gonna eat. I heard Tom Daley on the radio recently saying that drinking wine was the equivalent of eating a cream cake. Given that he’s a swimmer with 0% body fat, I believed him. As such, I decided what I didn’t drink in calories I could eat instead. I’ll never regret my fish finger sandwich with chunky chips decision. Bless you, Old House.


How my friends found it I had briefed my friends in advance, to avoid On-The-Day Peer Pressure, and after their initial interrogation they were supportive, even including me in rounds despite the fact I was mainly drinking heavily watered down fruit juice with pineapple stalks shoved in it. In fact, the main talking point was when I stoically ordered Diet Pepsi instead of full fat. It didn't go down well, with outraged cries of “If I order pop, I bloody well want sugar in it!” Meh, if I could stay strong on my non-drinking policy, I could stick out Pepsi pressure.

My boyfriend was so encouraging, after his initial faux pas of “are you sure you want to not drink...?” on the way there *me glaring wildly* After that, he went out of his way to find me interesting drinks sans booze, and regularly and increasingly told me he was proud of me for maintaining my pledge (he was drinking, evidently). This helped a lot because I like praise/feedback/a pat on the head.

How the Bar Staff found it

Most interesting of all was the Bar Staff’s attitude to my abstinence. The first place we visited is infamous for its cocktails, and I’d expected a full on Mocktail menu. Alas, one did not exist. So I opted for pop and food. In the next bar the barman kindly said I could choose any cocktail and he would do an alcohol-free version, but not before he looked at me like I had a small Frenchman doing the can-can on my shoulder and asked “are you...ALLERGIC to alcohol???” No no, just don’t want to drink. After much deliberation I chose a cocktail, asked if he could make it without the alcohol, to which he simply replied “No.” This was going to be a loooong afternoon.

Thankfully he redeemed himself when he served me the juice concentrate/pineapple sprig delight.

Conclusion
I woke up this morning feeling cleansed, physically and otherwise, for the first time in about 3 weeks. Not only had I managed to not drink, I had really enjoyed myself. I had then come home, eaten 2 rounds of toast, slept like a baby sloth and awoken with an additional string of strength to my bow. I also only spent £20 all day, and that was including shouting the Birthday Girl her lunch.

Right now, I’m really happy with myself for doing this. However, I might feel differently next weekend when my girls come up for the weekend from St. Albans, we’re all going to be together for the first time in 6 months and they most certainly will be drinking. Oh Christ, someone pass me the willpower.