Challenging the world to change - do you speak out or shut-up? 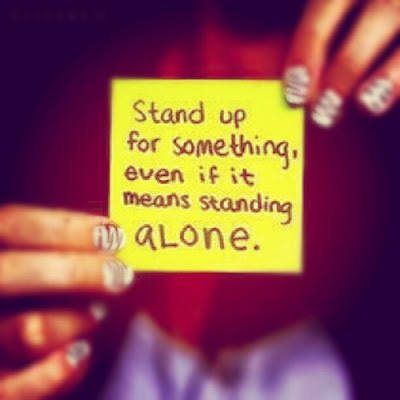 To stand up and challenge is a scary concept. It implies effort, conflict and even the risk of failure - when you 'rise to the challenge' there's a chance you may be beaten by whatever it is you are facing. Unsurprisingly then, lots of people avoid challenges where possible for want of an easier, safer and just less heart-breaking life. That said, we all rise to all sorts of unavoidable challenges every day, life is one long conveyor belt of challenges and most of them we overcome without even realising. But what about the challenges that we choose? Some of us choose to challenge everything we see, refusing to accept that 'this is just how life is', while others avoid this at all costs, keeping their head down and getting on quietly, getting on with everyone and never being in the firing line.

I don't think there's a right or wrong attitude here and there are pros and cons to both personality types, but I do believe that if you don't challenge something or someone, nothing will ever change and humanity won't progress. If no-one had ever stood up for anything I wouldn't be working, we'd be watching people tortured for fun and my gay friends would be living a life of misery. I use extreme examples, but the point I make is while life is happier when you just get along quietly, what are you really giving back to the world if you can't stand up for what you believe in?

Being a passionate and outspoken person, I tend to speak up when I disagree with a situation or someones behaviour, or if something right in front of me goes against the things I believe in. I will speak out, I will put my neck on the line and I will more often than not end up wondering if it was worth my doing so. Long-term, the answer is always yes. If you don't challenge people, they won't change, and people are responsible for the situations we disapprove of. However, short-term it can be a real pain dealing with the backlash of whatever I have just spoken up for this time and I do sometimes question why I feel the need to make a stand. I have lost close friends, had problems at work and made my life incredibly uncomfortable at times by standing up not only for myself but for what I believe to be right and good, instead of following the crowd and sucking up to the people who are big, cool or powerful. Bleurgh! While I am glad I don't conform, it isn't easy being this way! Sometimes I wish I would just keep my head down like everyone else, because it hurts being in the firing line.

So why bother? I certainly ask myself that sometimes! Fighting is tiring and it's not a good look on anyone. Really though, I know why. I speak up because if I don't stand by morals, what's the point of having them? I will always speak out, partly because I'm not shy (ha!) but also because I have a very strong sense of justice and I feel a moral responsibility. It is about choosing your challenges though, and as I have grown up I have learnt that some things are best left alone. But when something really strikes my heart, really makes me feel strongly and effects me every day - then I will speak out and challenge that person or situation. Most of the time, it takes a while for my 'saying something' to have been worth while, it can take years before the situation will turn around or for me to be 'rewarded', but positive change has to start somewhere and with someone.

I don't for one second assume that everything I believe or feel is 'right'  - of course it isn't! I'm just a 27 year old girl with so much to learn still and I am only following my gut, but I have to stand up for what I believe in, how can I respect myself if I don't? I also have so much respect and love for the people who challenge me. My Mum has brought me up to be very self-aware, so I am almost the first person to look at what I could have done or could be doing differently, my best friends are those who have made me a better person by challenging me and one of the things I most love about my boyfriend is that while he stands by me through everything, he will also challenge me when I need it. By accepting these challenges and using them to look at myself and improve my own conduct, I become a better person.

Winston Churchill said: 'if you have enemies - good! It means you stood up for something in your life'. I don't like to think I have enemies, but there are definitely a few people out there who I have challenged and while it might be awkward if I pass them in the street, I don't regret it and hopefully they respect me for having strong morals, sticking by my values and not just 'accepting' the world to be a way that I just don't think is right.

If you are outspoken or seem to come across conflict every now and then, it doesn't mean you are a bad person, it just means you are willing to challenge the world and want it to be better, and in a way, that makes you better than the people who don't. While you may find you cross swords with a few people, you'll find you also have a hell of a lot more friends, because people respect people who respect themselves.