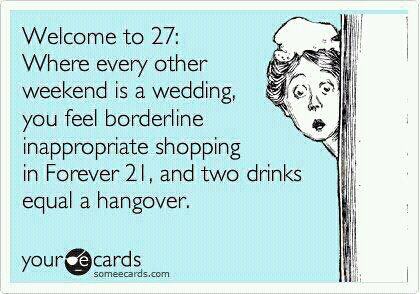 I'm turning 27 in 3 weeks time, which I was fine with until a few days ago. I was thinking about my birthday, then about the cake (obviously), then how many candles would have to go on the cake and then I got slightly sweaty palms. THE CANDLES WOULDN'T FIT ON THE CAKE! I did a quick question round with the girls at work to find out if they felt the same, that their life was flying by and soon they would be dead?! After a quick analysis I could confirm we'd all had this panic approaching our 27th birthday, so it's fine. I am not alone, but I am older.

I don't ever really think about getting older because my mind is always so full of the immediate future, but the late-twenties has sort of been that tipping age in my mind, an age that has meant 'adult, boring, old', and that slightly scares me. At 26 you're only just passed 25, which is definitely just about still footloose and fancy free, but at 27 you're careering (hopefully) towards 30, you can't get away with 'I've just graduated' anymore and if you get caught doing the things you were doing at 22...well, lets just say I don't think people would look on me so sympathetically if I drunkenly dropped half a chocolate cake on a homeless man now. At 27, you're expected to have some decorum, be a bit of a lady (or gent), show a bit of maturity and remember to put the bins out. Or are you?

As I approach 27, I am starting to really appreciate the meaning of 'age is but a number'. Not least because I haven't at any point in the last 7 years slotted into an episode of Friends (disappointing to say the least), drinking coffee every day with my friends who are progressing at exactly the same rate as me, whilst dressed  impeccably and contemplating my imminent fatherhood (just Ross then). While I have clearly made progress from when I was a tot in that I am gainfully employed, I just about support myself and I have recruited a wonderful band of people to walk beside me, there are other things about my life that I thought would have happened naturally by now. Like I'd want to do hoovering, I'd be really good friends with the same hairdresser I'd had for years (he'd be gay and Italian and I'd be his favourite customer), I'd drive a cool mini with the girls in the back, I'd stop getting chocolate round my face and needing someone to wipe my hands after spaghetti. But alas, I'm still as clumsy as I was when I was 4, I don't handle every single situation with great wisdom and integrity, I don't want to hoover ever, I have never been to the same hairdresser twice and I need my parents on average more than I used to.

That said, there are some things that have changed in recent years which I can only associate with adultness, most specifically mid-to-late-20'sness. I moisturise every morning and every night, with a good moisturiser. Who knew the glow it gives you? I prioritise having nice things over having too much fun (sometimes) and I wake up most Sundays hangover free, ready for the giant thrill I get from drinking tea out of my favourite big fat mug. A thrill that is these days bigger than the ones I used to get from Jager Bombs. I also look at 22 year old girls wearing too short shorts revealing their cellulite (me 4 years ago) with utter disdain. Er, hello adult, could I be anymore 27?!

I used to think becoming an adult was about having certain things (a car, a designer handbag, a story from 'my time in India') and being a certain way (mainly perfect but a tad boring). Now that I myself tip into 'adulthood', I have learnt that I don't need to have the life of Rachel Green to be be 'grown-up'. Maturity is about accepting who you are and being happy with it, whilst also knowing there is so much more for you to learn, and you can find that at any age. I just happen to be doing it now, or at least I think I am getting there. It didn't come easily to me, I had a really hard time getting here and had to be brave enough to break away from all the things I thought I depended on to be happy and strong enough to put my energies into positive things, even when I really didn't want to. But I did it and it grew me up and the rewards came later. I'll never stop falling over and I'll always need help managing my piggy bank, but nowadays I wake up proud of what I did the day before instead of paranoid about what I did last night and I am so happy with what I have around me, even though I don't own the shoes and success of Carrie Bradshaw (yet).

My modest New Look brogues, the fact that I'd still rather read Cosmo and that I still don't know a damn thing about mortgages are all good with me, because what I have achieved is happiness with who I am, what I stand for and my values. I had it once before, aged 17, but then I went to the emotional minefield that is university, had my heart broken and completely lost a sense of myself. A decade later I have come full circle and I hope I never lose it again. I don't have a specific idea of what I want to 'have' when I grow up  - apart from a satchel, I really really want a proper leather satchel, quite soon - I just know I want the people close to me to remain close, I want to always feel good about myself and actually I don't want to 'have', I want to 'be'.

I am sat here in my bedroom with my cup of tea, hair that needs cutting, a rounded tummy that still isn't and will never be flat, a slight uncertainty as to where my career will take me and my student overdraft still glaring at me like a tattoo I wish I'd never got and isn't going away, but I'm alright because I know who I am and what I care about and actually it is none of the above. What I care about, my happy place, is right here in this room that I share with the most kind man, writing on an old laptop - I didn't know this was my happy place 5 years ago, but I do now. So you know what? 27, when you're ready, I'm ready for you. I think. 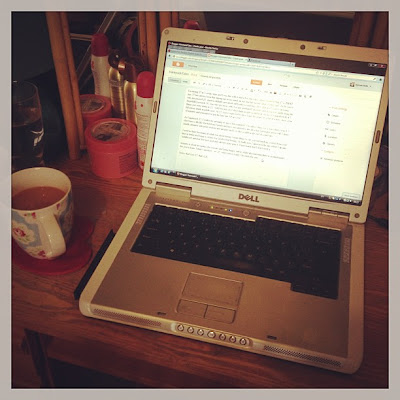