International Women's Day - can you be stereotypically feminine AND feminist? 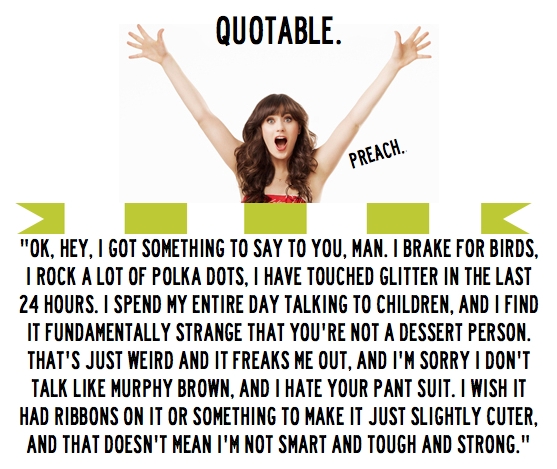 International Women's Day has been observed since the early 1900's,  when active movements of unrest among women began and we started campaigning for our rights - to vote, to work better hours, to be paid equally to men. Since then the stand women have taken has been something spectacular. Quickly we have gained independence and equality, become a part of everything from sports to politics, standing as respected leaders and fundamentally developing an incredible strength to match if not supersede the men-folk.

When I think of the women I know, I think of strong, unique, independent ladies who know not only how to be their own person, but how to stand up for what they believe in. The most heartening thing I see in women of 2013 is that they would rather be single and be true to themselves than disrespect their own values and answer to a man. Which is exactly how it should be.

My idols include people like Caitlin Moran, Zooey Deschanal, Jameela Jamil, Beyonce - some of whom are modern day active feminists, some just strong, beautiful women who try to promote female strength and loyalty. Amongst my friends, the ones I adore the most are those who are not only strong themselves, but who encourage that same strength in their friends, who are fiercely loyal to their girls and who would never, ever lower themselves for the sake of a man.

I have come full circle in the past few years in terms of my attitude and the level of strength I have as a woman, but I am happy to have grown in the right direction. Now I have confidence and the ability to speak up for what is right, what I deserve and what I need. More than that, I will fight when I am not being respected and ultimately I know I don't need anyone who doesn't respect me. That is not be a concept relevant only to women, but it is definitely something we have at times as a sex struggled with. 'What Would Beyonce Do?' has oftimes been my motto in recent years and it has led me to behave in ways that would make the suffragettes who came before me proud.

Something I have struggled with though, is how a 'Strong Woman' attitude marries up with the fact that I love being at home baking, cooking and taking care of my man. In one breath I am independent and ambitious, and in the next I am one apron away from being a stereotype. While I am career-minded and want to throw myself out into the world, I am never happier than when I'm in the kitchen, fulfilling all kinds of traditionally feminine roles.Controversial I know, but hear me out.

So can we be both?

Yes, actually, according to Zooey Deschanel: "I'm just being myself...We can't be feminine and be feminists and be successful? I want to be a fucking feminist and wear a fucking Peter Pan collar. So fucking what?" If Zooey is right (and because she is a goddess I am sure she is) then being strong and independent isn't about fulfilling or not fulfilling roles, it is about just being who you are and doing what you f***ing want (I don't feel as comfortable swearing as she does, but other than that we are exactly the same). I just happen to be someone who wants to do both, I want to stay home and wear pretty dresses and bake, but I also want to achieve a lot for myself, earn bucks, run marathons and go out dancing to Beyonce with my girls.

A recent interview with Zooey in Cosmopolitan gave me a rush of inspiration and I feel that same rush every time I see any woman doing or saying something strong. I won't lie, I have a big girl crush on Zooey but I write objectively when I say the reason she is so inspiring to me and to others is because she doesn't assume you need to be feminist or righteous or a man-hater to be a strong woman, it is just about being you, being true to yourself to the absolute letter, not only being confident of who you are but making the best of that person and flaunting them for all the world to see. That combined with total female loyalty makes the strongest woman you could know in my mind.

Something I always remember is that as hard as it can initially be to be a strong woman - fighting, sticking your neck out and coming under criticism - actually women love strong women and men love strong women. That isn't a reason to be one, but it's a pretty great reward.

Happy International Women's Day 2013 - go out and be strong girls. Here are some of my favourite 'Strong Woman' snippets that inspire me every day, be inspired by them too.

"It makes me sad when girls are bitchy. Girls get competitive, as though there’s only one spot in the world for everything ­ but that’s not true. We need to stick together and see there’s more to life than pleasing men. It’s important not to cut yourself off from female friendships. I think sometimes girls get scared of other girls, but you need each other."

Beyonce performing Run the World - look at this woman go!


How to be a Woman - Caitlin Moran

Anything Maz has ever said - she was ace 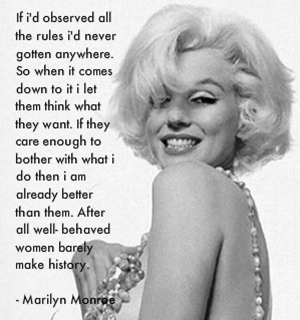 I have a browse of Hello Giggles when I want to be silly and to be reminded there are like-minded people out there who just want women to be strong and have fun and look after themselves - without men coming in and undermining everything that is said or done, which happens a lot on other online communities like Facebook.
Posted by Hannah Ruth at 3/08/2013 09:35:00 am