I just had a conversation with my gay best friend that went a little something like this: 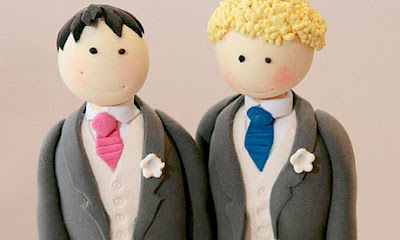 Today I have something a little more serious to blog about, something to hopefully make him a little more proud. I haven't planned this post and there's a chance I won't even proof read it, because I am typing heart-to-page in a bid to reduce the lump in my throat and tears in my eyes when I think of the challenges the gay community already face, day in day out; and like they need another thing to humiliate them, now the country watches as a decision is made on their behalf.

Roundabout now the powers that be will decide if gay marriage is okay. If we, the heterosexuals, should allow homosexuals to participate in one of the same ceremonies that has underpinned the entire structure of our society for centuries. Hmmm it is difficult isn't it? I imagine Hitler felt similar when he wasn't sure whether to let dark-haired people live.

I probably don't have to point out my anger at the very concept that our countries leaders have to come together to vote on gay marriage, and in some instances still question if even the very act of homosexuality is wrong. But it's not an 'act'. It's not a decision. It isn't a choice. Nobody woke up one day and thought 'I am going to graffiti next door then give homosexuality a run for it's money'. Ya know, anything to defy the powers that be. NO. 'They' are a human-being, with free-will, a heart, with feelings - and their heart happens to choose differently. Differently to what? Not to what's 'right', or what's 'normal' or what's 'better', just differently to not being gay.

NOBODY chooses the path of most pain, of that secret they bare as a young boy or girl, the fear of what it will mean for their families, their friendships, their future, if this secret (or they) ever comes out. The utter fear at telling their parents - those who dream of grandkids. The humiliation of telling their friends. The impossibility of telling their colleagues lest it change their treatment and respect in the work place. A 16 year old boy would rather try to take his life than tell his religious parents about being bullied at school on account of his homosexuality. A 21 year old man is a totally different one to his parents because they have no idea of his double life. A 30 year old man alienates his entire family and all but 'disappears' out of a total inability to tell his family 'what' he is. A marriage is faked as one partner silently denies who they really are, because our society still makes it that difficult to be gay. A famous footballer hangs himself.

Nobody chooses to have to go through all these things and therefore homosexuality is not and will never be an act.

Now I don't know about politics and I don't even know that much about the church, but I do know that this 'decision' being made today is not one for either of those things. It is one for the human heart. And my humble human heart sat at her laptop in Sheffield can tell you right now homosexuality is not wrong. I don't need a career in the House of Commons or to be able to walk on water to tell you that those who lead a gay lifestyle should have as much opportunity in equal ways as any heterosexual - including the loving, committed and celebratory institution of marriage.

Some of the greatest, kindest people I know are my gay friends - and they are fantastic company to boot. Should these people be denied an opportunity? No, Mr PM, they should be given more. For their strength, their fearlessness and their incredible ability to overcome one of the toughest challenges fate could have sent their way.

God bless you my lovely homosexuals! I WILL dance at all your weddings, and it will be a triumph over the damn Conservative Party and over everything that has come before for you.