Officially off the Fence: My First Football Match 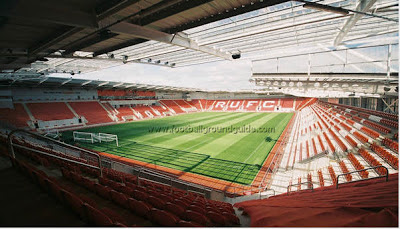 For someone with an opinion on Justin Bieber's fringe (a tad too thick to be affective), I've always been surprisingly indifferent where football is concerned. I'm certainly not what one would call a fan, but I'm happy to give it a turn every now and then. To me, football is that jumper that you're not really bothered about but sometimes it's the only one that will go with what you're wearing and so you put it on and you don't mind wearing it, hell you may even find it cosy, but really you know its a never going to get promoted into the 'regular jumper draw' and it's outings are probably no more than bi-annual. That's my relationship with football.

When it suits me I am more than happy to get involved in some good old-fashioned hooliganism, chanting with the best of them, hiding behind my hat when the opposition scores, squealing with delight during triumphant moments and panicking when cauliflower-eared strikers miss a penalty for the nth time. Usually you will find me partaking in all of the above activities when: it is the World Cup post-1996, I am watching out of support of my fella and his keen interest, or on very rare occasions my competitive side happens to be facing the right way to glimpse a random 2nd league game and decides it cannot stop watching until we know for sure that Aldershot have lost and Barnsley will not be relegated. On those occasions I am THERE. And I like to think I make a damn good supporter. All it takes to be a ‘good supporter’ is a loud voice, the ability to jump up and down on queue and a low to medium level of interest in what's happening on the field (even if that interest is just in, say, the wonderfully straight lines that have been mowed).

This Saturday however, my career as a person-who-is-mildly-interested-in-football-but-isnt-that-fussed took a massive dive. UPWARDS. If gravity did not exist and diving UPWARDS were possible, thats what happened to me this weekend. Right into the deep end of football. My chap took me to my very first ever Real Live in a Stadium Surrounded by Yobs Freezing our Tits off Football game AND I LOVED IT! Holy haribo it was good. Not a crackle of frost could cool my spirits as the day progressed into a bit of an adventure to one of the most memorable Saturdays of my LIFE. It's not often I can endure 2 hours of freezing cold without complaining but you have it on good merit I did not complain once. Certainly not twice anyway.

The day began with a walk to the train station and as we got closer my little feet gained haste until I was borderline galloping onto the platform, train picnic back bashing against my knees as we excitedly skipped along.  'pon the train we chowed down on pre-game snacks - sympathy snacks for those playing and also because I didn't know what level of edibility to expect from the quality of half-time pie I’d been promised. We were going to watch Rotherham play Cheltenham ('starting at the top' as my Dad put it) so off we went to the rather classy and new-fangled Rotherham football stadium. Also known as New York stadium. There is something awesome about the fact Rotherham’s football stadium is posing as New York’s and it is getting away with it. This in itself was enough for me.

En route to and inside the stadium, it was everything I hoped it would be. Police warily lining the streets, bald headed men in striped scarves staggering along to take their pew after a few too many pre-match beers, 3 generations from one family hurrying to watch as Grandad and Grandson chanted in unison, freezing cold seats that iced your buns on impact and a mob of lads sat behind us saying things like 'If you were the LAST PEOPLE in the world, like the LAST people though, would you sleep with your Mum?' (True quote. The answer being 'I know my Mum is fit, but I wouldn't'). I felt like a 10 year old boy featuring in a book by Nick Hornby.

I grabbed a hot drink and Gareth's hand, settled in for the game and squealed with delight the second the 'real live footballers' came jogging onto the pitch to cheering and started girding their loins. Knee-ups and star-jumps filled the field, while a team of 8 or so Rotherham girls cheered on the sidelines, Red and White pom poms bouncing up and down. A surreal moment ensued when what appeared to be a mini wrestling match took place in the far corner of the pitch - not an audience kerfuffle as one might presume, but an actual weird 2 minute wrestling match complete with commentator and an introduction of each opponent via megaphone (each of which was met with the most bemused silence across the whole stadium, a bit awkward to say the least). The wrestling involved about 3 punches thrown, one man launched onto his back followed by the launcher sitting on the launchee. Wiith that oddity over it was time for the REAL battle to commence.


Once the game started I was captivated. It was 1-1 within the first 3 minutes and I was enlightened to just how entertaining live football could be. Who'd have thought this multi billion pound industry was so worthwhile. I yelled at CTFC to 'come on chaps!', I jumped up off my seat, jeering at Rotherham when we scored, jeering at Rotherham when they scored, I sighed and roared and yodled my way through the game like a one-woman jungle. Competitive sincerity combined with childlike excitement, I was the definition of supportive. I ate my Pukka Pie, I stamped my feet to stay warm, I told the lads just 'sort it out fellas' when their defense proved poor. I may have been OTT and clapped my hands like a seal whenever the ball flew up 'into the audience', but I was having so much fun. At a football match! I was a LAD!

Home time came all too quickly, and I felt a little sad as we traipsed out of the stadium, forlorn at our 4-2 loss but rosy cheeked and sparkly eyed nonetheless. I didn’t want to leave. I even hung about in the ladies lavs waiting for everyone else to leave first, huddling under the hand dryer for warmth. Needless to say I had a fantastic time and I definitely want to go again. My stance has changed to 'a person-who-is-mildly-interested-in-football-but-really-interested-in-going-to-see-it-live-and-might-pick-a-team-next-season', and I am happy about it. I have moved off the fence into firm 'football is pretty cool' territory. Oooh risque. This could be a threat to the rest of my character, but ultimately sits better with me - I don't generally enjoy perching on fences.


However, do I have the staying power to be a fully-fledged FAN? To dedicate hours of my life to a team of 11 shortly-shorted men running within a grassy grid on a cold winters day, chasing a ball to the soundtrack of derogatory chants and the view of a fat, suited man chewing gum at the speed of light while gesturing wildly to his team to 'GET THE BALL! GET THE BALL!' (years of training and a 50 grand pay scale just to reach this level of specialist advise)? Actually, I do. And this is why I CANNOT continue down this road.

I wish I could, because football fan-ism appears to be a slippery and wonderful slope. It's the big kids flume at any local swimming pool. Give me a few goes and like the 16 year old who accepts that 'one puff' from their friend in the park and swiftly becomes that 40 year old chain-smoker, I'd be hooked.  I would never be a good football fan, because I just can't do things by half. It would take over my whole existence.


Gone would be my Saturday afternoons in the warmth of my kitchen in my Cath Kidston, sacrificed for hour upon hour in cold football stands in a fleece, clutching a flask in a hope the feeling would stay in my toes until at least half-time. Banished would be my pretty dresses  in place of endless club t-shirts, organised by year and worn by none. Nonchalant trips to town would be something of the past as my neck strained for a screen in every pub, comet and ELC.  My bank balance would be murdered red by the much sought after season ticket. My friends would be replaced with miniature footballer dolls and in place of my real life boyfriend I'd have Theo Walcott, Jermaine Defoe and the Neville family at the table for dinner. My photo frames would be swiftly replaced with football memorabilia and i'd sell everything I owned to hoard merchandise. Worst of all, I'd have to find a new conversation-starter beyond 'so, can you explain the off-side rule/' which currently works as a fantastic filler in any given tumbleweed moment.

This is what would happen if I became a football fan because it is JUST TOO MUCH! So while I will continue to support England (both in football and in life) and if another casual trip to the footy comes up i'll be the first on the train (i’d even buy my own ticket), for now I am leaving the real fan-ism to the likes of my Dad and boyfriend and people who can handle the sheer excitement, to support their teams in an orderly fashion, and I’ll stick to more calming tasks like organising my spice rack.