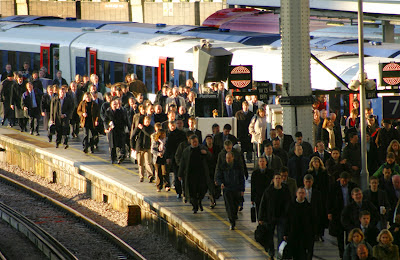 Commuters. You’ve seen us. There are lots of us about. We tend to hang around train stations and 24 hour cafes, we wear too many layers and often a frown, we walk either zombie slow or sonic fast, and there’s a high chance we will cry if you ask how our day was. Remember us now?

I first started commuting 9 months ago (all that time travelling I could have had a baby by now) when my new this-is-the-one-I’ve-been-waiting-for job happened to be in a city that wasn’t the one I lived in. Dilemma? Not for me. I approached the challenge with a few things on my side; a lot of natural energy, a terminally positive disposition and a naïve belief that if lots of other people did it, it couldn’t be that bad.

Skip forward 9 months (or battle forward, as in my case) and I have realised that was like thinking child birth can’t be that painful if loads of people keep having kids. It can and it is. I’m speaking about the commuting, I haven’t had any kids yet, although it would probably be less painful...


On the Road Again.. 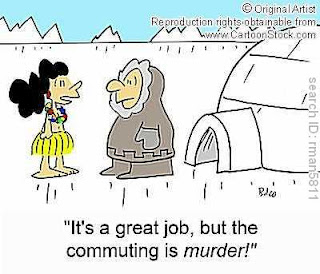 The perils of commuting isn't just a moan, commuting long distances has been found to be a primary cause of stress in today's society - above bills, relationships and other adult 'issues'.

There were things I knew would be tough about travelling between 2 cities every day– the early mornings, the delays, the cost of travel, never knowing whether to bring your brolly or your sunglasses, dressing for 2 climates instead of 1 (which in England with its changeable weather basically means taking snowboots and suncream to work with you 365 days of the year), never being able to sleep in by even 1 minute because it would set you back about half a day, and so on. These were things I thought I could handle though. I’m a morning person, I’m chronically early (lateness makes me want to throttle the latee), I have an amazing Mary Poppins handbag for afore mentioned snow boots/sun cream AND I love being on trains. So commuting for me should be a walk in the park yes? Nooooooo.

Beyond the obvious, there are things about commuting that people don’t tell you. Things that, even on your best day when your hair is shiny and so is the sun, could bring you down in a nano-second, down to a gibbering wreck of frustration with a screaming migraine and sweat patches to boot. If you are a commuter, you know what those things are. If you’re not, then I won’t bore you with them. Instead, I have decided to impart the knowledge I have learnt in my 9 short months as a commuter, knowledge of things which I have learnt can help ever so slightly keep ones sanity from Monday to Friday and sometimes make commuting…enjoyable.

Tips for a Happier Commute

Whatever time your train is due to get you in to destination city, add on a 30 minute buffer. More often than not there will be some kind of delay that even if just a few minutes long can ruin dinner reservations, cinema trips and plans to see the Olympic Torch after work [actually I was okay and did manage to see the Torch, yay for me!] This works on your outbound journey too, whatever time you’re due into work; let your boss know it will be 30 minutes after that, so you don’t have to panic and sweat every time your train is slow.

Get Lost en Route
Never, ever rely solely on your ipod to get you through a train journey. Yes 40 minutes is the perfect amount of time to listen once again to that new album, but when there are infinite hold ups and your journey time is quickly doubling, you need a stronger distraction. You need a book, you need Sudoku, you need Cosmo, you need your kindle and you need your smart phone. You need to be so engrossed in what you’re doing that you’ve stopped stressing about being stuck in Wakefield  and happily looked up at midnight to discover you’re in Plymouth. Oops. Yay, beach holiday!

Wear a Hazard Warning
Now, whenever I make plans for during the week I tell my friends in advance that I will be tired, late, hungry and most likely bad company. Its better that they know in advance. Then you don’t feel like you’re letting them down on the night. The good friends will understand and may even meet you straight off the train with a glass of wine. Those who don’t understand will probably look fearful and cancel – in which case you’re off the hook and problem solved anyway. Hurrah, straight home and into the bubble bath!

Economise!The 45 minutes it takes me to walk home from the station, I can often be found with my right ear glued to my Blackberry – catching up with a long list of friends who I no longer have the time to tweet let alone SEE! I book them in for when i'm on the final stretch, so not only is the walk home quicker and more enjoyable, but I have ticked off one less thing to do when I get in. Other time-economising strategies that work for me are:  do your make-up on the train to gain an extra 15 minutes in bed, run home from the station to squeeze in your daily exercise and even eat your salad dinner en route so you don’t have to cook when you finallllyyyyy get home.


Be That Moaner
Although no-one likes a moaner, you can still let key people know that commuting is RUINING YOUR LIFE in a constructive way, so that they can help you. It’s surprising what you can get if you ask. Ask your employer for some extra cash to help cover the costs, ask your boyfriend to cook you dinner ready for when you get in, ask your housemate to go to the post office for you because you can never find the time –  sometimes people might say no, but there is never harm in asking. My life was made a lot easier when I learnt to ask for help, do it!


Treats Treats Treats! Being constantly on the move means our minds and bodies get a lot less rest than they did before, so we need to make up for it in other ways. Book a massage, have a spa weekend or just take 15 minutes  out with an ice cream one lunch time. Hello Mr Whippy!

The Little Things
It’s a cliché, but I always say clichés are clichés for a reason – they are largely and widely true and this one is no different. The very little things in your day can turn it around from commuters hell, to a lesser hell. Things for me include:
Anti-Commuterism
In the same way my gay best friend mainly dislikes other gays, at the start of my Life as a Commuter I despised others of my kind. They are moody, they invade my personal space, they get the last seat before me and they occasionally stink. One day recently though, a lovely smiley girl on my train offered me a MUFFIN from her pack of four (M&S no less). Although I initially said no, even the gesture was enough to make me feel better about being on Yet.Another.Train. and about human kind in general. When she left the train, she left me the remaining 3 muffins in the pack and I basically cartwheeled the rest of the way to work. Next time you feel like scowling at a fellow commuter for daring to BREATH in your space, why not smile at them instead?