Shadows Fall Behind You: Running for My Life 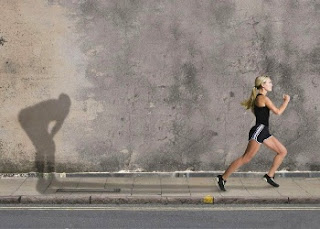 "I always loved running…it was something you could do by yourself, and under your own power. You could go in any direction, fast or slow as you wanted, fighting the wind if you felt like it, seeking out new sights just on the strength of your feet and the courage of your lungs.” – Jesse Owens.

When people ask me why I love to run, I never have one clear answer. I partly run for fitness, partly for pastime, partly because I have that much energy that if I didn’t run it away I would fizz away into the sky. More than this though, I feel like when I’m running, I’m running for my life. I don’t mean I’m forever being chased down the road by a madman angrily wielding a sharp stick, rather I feel like my running is the essence of everything I am and do. In this blog post I am baring my soul a little, and explaining to everyone exactly why running can be so brilliant and why it is by far and away the best thing I ever did.

"Chase Your Passion (Not Your Pension)" - Denis Waitley
Everybody needs something. Something they can depend on to keep them strong when everything else falls apart. Something that will without fail lift their hearts, clear their view and unbound them from the sting of reality, even if it's just for a moment. Our worlds are changeable, unpredictable and perilous, so we need something consistent to fall back to, whether you’re the happiest person in the world or if it’s all you can do to breathe. This something has to be free, immaterial, because you never know when you will have spent your last, and it has to be something you can return to anywhere, anytime, without the need for a single other person. And it has to be yours.

Runners High
I first started running just over a year ago, when the chips were very much down. I had been emotionally, physically, mentally, professionally, socially and thus spiritually at absolute breaking point. Some days were pretty Black, and I couldn’t see a way out or up or on. It was, in a word, bleak. 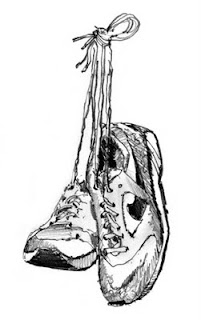 At the beginning of the end of that untidy time, my Mum suggested to me that when I had hit a wall, I should just ‘go for a little run’. Exercise has never failed to have the power to lift me from a slump, even if just ever so slightly. Yet it’s something I had long since forgotten about amidst my turmoil. I’d never, however, had the confidence to run out on the streets, during my insecure university days it seemed daunting and like something only Cameron Diaz should do. But, made bolder my challenges, when my Mummy dearest recommended I give outdoor running a try, I did. And I thank the world every day that I got in from work that day, borrowed my housemates running jacket, re-discovered my trainers and ran…around the block.

That first day I think I managed about ten minutes before I collapsed back through my front door and claimed I had “been for a run”. Standing in the shower after that first run I remember feeling lifted and a bit like I had just said “bring it on” to everything in my world that was difficult at that time. I felt instantly stronger, freer and more confident about who I was. The next day I did the same thing again and the same feeling came back. I was experiencing the buzz of the Runner’s High, and I loved it. Before long I was going out 4 or 5 times a week and over time built up my distance, 15 minutes, 20 minutes, 40 minutes, 1 hour.

Addicted to Pace
It only took a few months for the addiction to really kick in. I would sit at my desk at work craving the time when I could get out on the streets, put my ipod in and pound away my stress, strain and fears. If someone pissed me off at work, I could hammer the pavements and mentally say “f*** you” whilst doing so, and it felt amazing. If something had made me sad it was admittedly harder to gather the strength, but within a few minutes of running my spirits would be lifted and I would remember what was worth caring about. If I was happy, running was a celebration, the icing on my cake of dizzy excitement. If it was sunny I would feel the burn in more ways than one, and if it was raining I would just get absolutely drenched and although my hands would be so cold I could barely hold my ipod, my feeling of strength just got stronger. 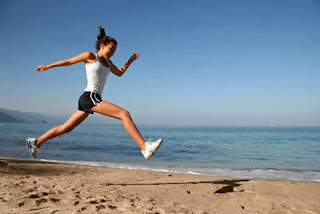 They say one addiction replaces another and I can honestly say that running has since then replaced all other negative focus I might have had. Obsession with my social life has lessened; any dependence on the people in my life has eased and there is no longer room for focus on anything or anyone negative – and if they dare to creep in, I’m straight on the pavements shaking it away again.

When you’re running, you feel yourself getting stronger with every step, feet falling heavily on the ground like you’re putting a physical stamp on the earth and you’re paving your way. You see the world from the outside looking in and consequently see it a little clearer. With each foot that falls to the beat of your playlist, you feel a small achievement. For each steep hill you struggle up, the view at the top is a reward 100 times over. For each park you run round, taking in the scenes and sights (and in my case trying not to fall over fishing rods into dams), you feel your stress fall away and your carefree self return.

For me running isn’t just about fitness or pastime. It’s my detox when I have over-indulged. It’s my head-space away from the world when I’m feeling the strain. It’s something I can do when I want, where I want, for free, independently. It’s where I collect confidence when I’ve taken a hit. It’s where I find perspective when it's lost. It’s how I remember who I am and it’s where I discovered who I want to be.

I know running may not have this affect on everyone and people often tell me I am mental when I say I love running. But in the same way my Dad picks up a guitar and finds himself in a new tune or my friend picks up a brush and paints herself back to life, for me it is running that built my life as it is today. It slowly lifted me out of a pit, and continues to carry me onwards and upwards. Running continues to save me every day (or every other day to be precise).

What a Difference a Year Makes – The Leeds Half
A year later and last weekend I completed my first half marathon. I entered 6 weeks before the date, knowing I was probably a regular enough runner that I would be able to finish, but also knowing that it would still be a massive challenge. In the weeks leading up to the marathon, I trained as best as I could push myself to. I did everything right. Ran, stretched, slept, ran, ate right, ran, cut out (*cut down*) alcohol and compiled a Playlist Paula Radcliffe would pay millions for. Yet despite my preparation, when the day came I was petrified. Not of the running, but of the unknown. Like the first anything, no matter how much you prepare yourself for something, you don’t know until you’ve done it. And that’s terrifying. 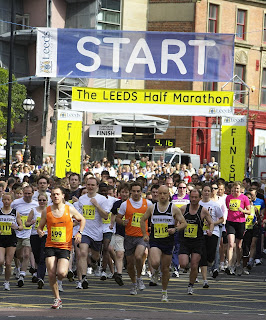 My sister dropped me off in Leeds city centre before the race; I happily got out the car, smiled excitedly, said bye, shut the door and…started crying. I opened the door again. “Why are you crying!!!” she laughed, her eyes darting around her, vaguely concerned in case the story she’d been putting to my parents all these years (that I am insane) had actually come true. “I don’t know!” I cried (literally) and resisted the temptation to launch myself back into the passenger seat and indeed declare insanity. I shook myself, laughed to show her I am NOT insane and quickly darted off to the start point before I bottled it. I didn’t bottle it. I ran the distance in a time I was proud of and at the end I felt a sense of momentous achievement I had only half expected to feel.

I know I’m no hero, thousands and thousand and thousands of people run half-marathons, full- marathons, triathlons, 10K’s and other such races all over the country, all year round. And in as much as those people deserve congratulations, my sense of momentous achievement wasn’t because I had run 13 miles. Lots of people run 13 miles all the time. No, my sense of achievement was because as I approached that finish line, with a proud river of sweat pouring down my face and my feet completely detached from my body, I thought about that day when I had first started running. I thought about how my life was then, that bleak moment when I was on the floor, and I looked at how my life is now and how running has, one way or another, helped me turn my world around so completely, so that I’m on a path that just makes me stronger and stronger with every stride. And I can honestly say I have never been so happy.

Thank you
So THANK YOU to everyone who sponsored me and supported me, because while your financial donations are going to DeafBlind UK to support those with this lonely and challenging disability, your support will also continue to, for a very long time, act as a reminder to me as to why I’m really running and what I’m really running for x
Posted by Hannah Ruth at 5/22/2011 03:26:00 pm 2 comments: