The Summer of all Fears Yesterday the centre of Sheffield city was swarming with floral dresses, gladiator sandals, over-sized sunglasses and thousands of pairs of pale, unprepared legs – unprepared to have overnight been tugged out of those trusty skinny jeans that saw us through from October to now and into last summers short shorts that we’re now thinking perhaps look a bit like maybe we should have left them to Kate Moss.

The above scene can only mean one thing – Summer has made it’s first appearance and citizens of the UK are excited. Ice-creams? Hurrah! Beer gardens? Yes please! Holidays? Flights are filling faster than my wine glass on a sunny day. Festivals? The line-ups are being announced, the early-bird tickets are a thing of the Spring past and we can’t go on Facebook without seeing the following status “[insert infamous festival name] Booked!” taunting those who have not.

However, beneath all this excitement, deep down inside the bottom of every Summer 2011 debut Mr Softy cone, I sense panic. For as much as we love the summer and embrace all that it represents with open arms, there is the fear that we are unprepared and that those open arms may in fact be badly dressed bingo wings that frankly should never see the light of day. In amongst other summer related fears, this is enough to make us wish we’d had just a little more warning…From bingo wings to bankruptcy, here are my four summer fears and how I have learnt to combat them.

Out and proud
Having hibernated inside with winter comfort food and warmed our cockles with too much alcohol over the festive season, and well into the “New” Year, cellulite counts are probably higher than one would want to find on a beach. As a result, my room has for the past week resembled a jumble sale, as I have tossed clothes out of my wardrobe and into an abyss, in a bid to find anything appropriate for this glorious weather. Anything that doesn’t make me feel like a giant mound of mozzarella trying to pass itself off as a girl in a frock. I don’t need a dress; I need dressing and a side of tomatoes. 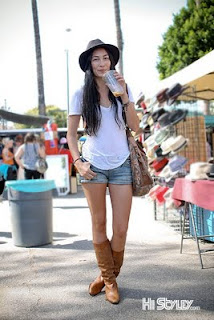 Yet while sat in amongst the heap of garments, colouring my life like unwanted bunting, I realised that it isn’t the cutesy dresses and tees that aren’t right. It’s the pasty legs and untoned tummy hoping to parade them. Nothing a nice tan and a few weeks on the salad can’t fix. But we don’t have a few weeks, people, summer starts NOW and those BBQ’s won’t wait for no man. For me, there is only one thing for it – straight into Boots to frantically clear the shelves of Johnson’s Holiday Skin and then next door (literally) to HMV for the Davina DVD. No we won’t necessarily look like Jessica Alba by next weekend, but it’s a start, right?


So for another year we have had a taste of what life would be like if we lived in Australia, California, Spain…or anywhere that isn't the UK and seemingly has year-round sunshine. We have sampled a life of parks and happy bus drivers and smiling children and joyful bosses. And we’re terrified, because we know all too well that when April comes along and offers us a delightful splashing of sunshine, it is just a matter of time before the clouds close on our yellow friend and we’re sent plummeting back into April showers and “unsettled” weather. Unsettled indeed! A mere euphemism for an unpredictable collaboration of cloud and drizzle. If you’re going to break our hearts, Weather Man, at least have the decency to be honest with us. 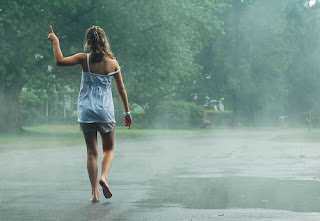 I don’t want to burst anyone’s sunny bubble, but as a fan of the 5-day forecast, I know all too well how quickly he taketh away and I am prepared for the flip flops to go back under my bed for a little while longer.
Looking on the bright side, this does negate my first flabby fear – I like to see the April “summer” as a preview, or moreover a warning. This is what you and your bare legs need to be prepared for, my friends, says the man in the sky. So now we have a little while longer to crunch the living daylights out of our abs, hand-wash those linen dresses and pursue an interest in Fake Tan (just remember, Fake it Don’t Bake it) until our real summer rolls around. 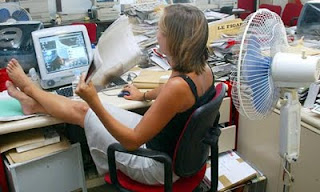 When the summer comes along, it is a wonderful parade of BBQ’s, beer gardens, park-based gatherings, long lazy lunches, road trips, festivals and holidays. Great when you are a student, have all the time in the world and are still sponging free money, but now we are all grown-up, how are we going to fit in a job around all these exciting activities? When the world is outside supping and sunning, it is highly inconvenient to be trapped in the confines of 9-5.

It is easy to be professional during the winter time, when there isn’t much calling you away from your desk other than a comfy sofa and a hot chocolate. So we’re pretty happy to put in the hours at work instead, because at least we don’t pay for the heating at there (every cloud). It is a little harder now however, when there are 9,781 massive reasons to be outside and just 1 small reason to be indoors – your job. With each BBQ we miss and each sunny drink we pass up in favour of hitting the gym to prepare an Ibiza body, it becomes more of a struggle to stay strong.

The bitter-sweet Summer issues us with a constant conflict of interests – the sunshine beckons us and begs us to go play, but more than ever we need the extra money to do so (hello job) and the confidence to wear a bikini (hello gym). For there is really no point in going out to play if you have 10p to your name and refuse to change out of your boiler suit, sat uncomfortably under a gazebo insisting you just like being dressed in head to toe black in 35 degrees. 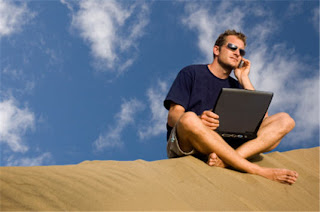 So the summer scares me somewhat, as it is the Apple to my Eve. However, I have found ways of assimilating my professional lifestyle with the temptations of the outside world. By bringing summer indoors. If like me you’re lucky enough to have a relaxed employer, who advocates summer attire, lunchtime BBQ’s and an endless supply of diet coke, then you’re halfway there already. Wearing flip -flops at your desk, walking around bare foot (no I don’t, Health & Safety) and swishing around the office in a pretty skirt makes you feel instantly more summery. Browsing the Topshop summer range online (under the supervision of your line manager) in office hours is also a great way to make sure you’re not missing out.

As well as dressing for the occasion, I like to plug into Radio 1 of a working afternoon so that I can have a dance at my desk and keep in mind all the fabulous music I am going to experience at my chosen summer festivals. I have also found pinning up half-naked images of Matthew McConaughey strolling out of the sea in and around the work space is an effective means of living the dream within the confines of reality. If the Mountain won’t come to Mohammed…

So much to do, such a perilous credit card…
From about March of each year, you can’t go online without being reminded of the thousands of possibilities for your summer. Pop-up ads from EasyJet offering to send you off to a glorious beach somewhere for 99p. Emails from those devilish Ticket Masters painting pictures of fantastic live music in the beautiful sunshine. Invites from friends for holidays, festivals and other summery treats. Seriously Eve couldn’t say no to an APPLE and we’re supposed to be restrained with all this??

However, the reality for most is that with limited free time and funds, we need to be selective with the events we commit ourselves to, and consequently a wave of panic ripples through us as we invites come flooding in and we wonder in alarm which one, WHICH ONE!? Do you go to Glastonbury with the rest of the world armed with Hunter’s, a car full of crates and some dry shampoo? Or do you head to a beach in Eastern Europe, where the sun is pretty much guaranteed and beer is half the price? As excited I am for the festival season, a small part of me wilts inside when I have to say “No” to the mass of other potentials that I’ll do “another year”…

However, as much as the initial panic and confusion sends us crazy trying to decide what to do and when, I have found that once the decision has been made, the flights have been booked and the excitement built, we don’t care what else is going on in the rest of the world because we know OURS will be the best time ever, and it doesn’t matter if U2 will be headlining or not…Decision is the sweetest thing and once it’s played its part, its all systems go and what follows is weeks and weeks to get excited for what will be the festival or holiday of a lifetime.