Mobile marathons with your mates. Priceless?

For me it’s an undoubted fact that girls generally love to spend as much time as possible on the phone. And men don’t. For them, the shorter the call the better. Whether it’s their mum, their girlfriend, their mate or the Chinese, the quicker they can get things wrapped up and say their various ‘I Love Yous’ (in the appropriate places) the sooner they can get on with putting pasta inside massive bread and overfilling the washing machine. And to be honest, I think they’re on to something. Here's why...

I was recently startled and bankrupt in equal measure by the size of my phone bill when it flew happily into my hotmail last week. The sum in front of me was not one for poor eyes. How could this be? I begged of myself, staring accusingly at my phone. ‘You had better not have been calling Australia unknowingly again’ I scolded myself guiltily (it’s been done). I knew I hadn’t actually been holding daily international conference calls with the Southern Hemisphere, but I was traumatized by the figure next to the Payment Due tab on the email in front of me and was sure I couldn’t possibly be responsible. What could I have possibly been doing?!


'A mad dash away from my desk and some well placed hold music (Hey Big Spender) later and I was unceremoniously told by Jane on the o2 switchboard that I had casually gone mightily over my 2,000 free minutes (plus free calls Saturday to Monday. ahem.). Plus then of course there’s the tax, love.'

So basically what I had ‘possibly been doing’ was exceeding my 2,000 mins/m over the course of what is actually only 16 days when you take away the 3 free call days each week. I actually don’t want to do the maths.

The main culprit of my mobile bill quandary is my best friend from school. A cliché I know, but she and I are a perfect example of the scary amount girls can prattle on about twaddle for several hours and be quite happy to keep doing so until a prior engagement rudely beckons us and makes us resentfully say ‘we’d better go... sigh’, pulled unceremoniously from the colourful envelop of a BFF phone call. And that colourful envelope of joy is exactly why we do it. Some are addicted to Mars bars, some to wine, some to the buzz you get when someone famous tweets you back, and we, the womenfolk, are addicted to the elation of a good old fashioned mega-call with your girls.

The point is, just how do girls manage to rack up so much conversation? I mean I’ve always known I can outtalk Frank, but what do we talk about? If you, the men, are under the impression we discuss proper things and reach genius epiphanies whilst solving worldly dilemmas, you are mistaken. For though we do this sometimes, it’s not what has my phone bill nearing triple figures.

Only recently me and culprit school friend spent a good half an hour (of a 2.5 hour ‘catch up’) coming up with outlandish states of affairs, such as the idea of me loitering near my house with a bandage on my head and claiming to be Humpty Dumpty. Something we found absolutely uproarious for much longer than necessary. I am not going to bore you with the details of how we came to that particular picture, but it was half an hour of my life I will never get back. On the other hand, I wouldn't want to. 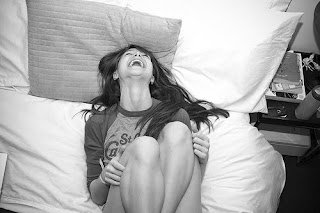 For despite the fact that period of time produced nothing but an extra 0 on my o2 invoice, it was 30 minutes spent ecstatically hanging upside down off my bed in a fit of laughter and eventually toppling on to the floor to continue the hilarity laying flat on my carpet, unable to stand for the fact the wheezing and spluttering had drained me of all strength. What’s more, it wouldn’t have been so funny if it was a face to face conversation. Something about the safety of distance means you can conjure up more ridiculous scenarios than you would ever dare in person.

In contrast, when I speak to my male best friend – as enjoyable as those conversations still are! – it’s very different. It’s a case of ticking off an itinerary of points we need to cover this week, progressing through them as quickly as possible, summarising that we’re content we know enough about each other’s lives to tide us over for another week, and then ringing off in time for Big Brother. It is just a completely different kettle of conversation. If I attempt to start a completely unrealistic imaginative wondering and deviate from Real Life, he has a charming habit of  putting his phone down on his bed/desk/nearest cliff edge, goes off to read a chapter and comes back 15 minutes later to find me still talking, unaware I’d ever lost his interest and indeed his ear. It's win-win. He's just not quite so up for the lengthy musings in the fanstasical forum of a phone call that me and my female friends so obsessively indulge in. Well of course, it’s a waste of time...or is it?

It’s not just phone calls. It's not rare for me to hole up in my room for 3 hours on a Sunday afternoon having a Skype date with my my long lost ‘Wife’ friend who's currently residing in Taiwan. Gossiping with my laptop. Telling it stories. Laughing at its jokes. Detailing exactly what I did from last Thursday to now. It’s a good job Wife is on the other end of said laptop at her desk in Taiwan, and what’s more is quite happy to listen to me recite my recent life events in painful detail. In chronological order. Names, times and toppings not omitted.

I suppose it’s not so astonishing then that our phone bills continue to be higher than the average persons IQ every month. Given that we lasses are capable of talking about everything under the moon and spinning downright drivel for hours on end, twice over, every day, I wonder why service providers haven’t developed their own girl-centric tarrifs offering 10,000 minutes for every 50,000 you use, throwing in a free R-Patz screen saver and a box of chocolates for good measure.

When put like this, cost issues aside, I think the population of people with phonebias (male or female) are in fact missing out. Nothing makes us happier than laughing with our best friend about something only we find funny. That is actually not funny. At all. Ever. In any stratosphere.
Even when it's unrequited phone-love, if he does put the phone down on his bed and go off to make some dinner while I prattle on regardless, I still feel radiantly happy when I bounce accidental thoughts off of his uninterested self. So even if my next bill tells me Imust never communicate via mobile again or will be fined £3 million and thrown into isolation until I learn the value of silence (yeah okay then), the chances are I will just pick up the phone and tell someone about it. Speaking to your best mates? Definitely priceless. (Until it reaches the cost of a flight to Taiwan….)
Posted by Hannah Ruth at 9/02/2010 11:02:00 pm