Smoking, Pineapple and L’Oreal: What’s your deal-breaker? (because you’re worth it)


So one of my recently de-coupled friends has launched himself back out onto the dating dance-floor and is sampling the delights of single life once more. I am happy for him obviously, but I am also happy for myself. For he is proving to be nothing less than a fountain of inspiration when it comes to relationship related musings (which I Love). You see, the joy of a newly single person is that they’re exploration back into the single world is like they’re doing it for the very first time.
"A date? I have to go on a date? Do people still go on those?? What do you mean I can’t specify the details of my previous relationship within 24 hours of knowing them? And since when did a text not mean I LOVE YOU??!!!!?" Err...dating is not like riding a bike, apparently.
The point is, when you’re so used to the familiarity, comfort and all-sharing-ness of a relationship, sometimes newly singles have a hard time learning that all the above cannot be applied back out at the cattle market that is today’s dating world.  Forget cattle market, it’s more like an unruly auction. You shine yourself up, put yourself on e-lay or amour-zon and the highest bidder wins.*
But getting used to being available again is one thing; actually dealing with the uncertainties of lustful networking is quite another obstacle course all together. There’s the ‘is he looking at me or the discrepancy in my ear levels?’, ‘should I go over?’, ‘when should I text?’, ‘what if he doesn’t text back?’, ‘shall I just ring/Facebook/fax?’, ‘why did it go to voicemail?’ and ‘are u sure that the fact he has blocked me on all social networking sites and both his mobiles isn’t just him playing it really cool...?’
Well some things are more certain than others, but for my featured friend, just when he think he’s nailed the game, something comes up and reminds him that nothing is certain in the dating sphere and it doesn’t take much to turn a potential love interest into wanted posters in your street’s neighbourhood watch log. 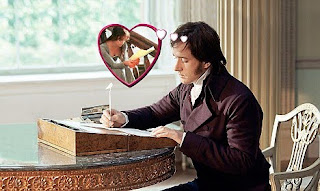 (Not helped, I might add, by the ever increasing forums of potential communication and rejection. Bring back the days when you just sent a hand-written letter by horse and cart and if you’d not heard back 3 weeks later you knew there was a high chance the driver had caught pneumonia in the middle of a Jane Austen, letter disappeared in a rainstorm of pathetic fallacy. By which time Darcy had swept you off your feet anyway and you didn’t care about the boy from last week’s banquet. That was the life. )
So my friend had met someone last weekend, has been texting them ever since, had a good few phone calls and the promise of a drink next week. A walk in the park? No. He rang me up yesterday  no longer than one hour after a cheeky work email telling me how great it was going, sounding nothing less than perplexed. “I’ve been dumped already?!”  Why? I hear you all snivel! What had he done? It had been going so well!
Well, having been exchanging obligatory introductory get-2-know-u texts with his new beau, he had casually mentioned his smoking habit. ERROR. Potential new lover had recoiled in disgust and proclaimed “oh...you had been doing so well!” Ominous. He’s not even a 60 a day man (smokes that is), just a good old fashioned have-a-fag-when-you-feel-like-it smoker. This clearly was not something he had ever envisaged as a potential ripple in cupids swimming pool. Or in his case, a tidal wave that left him washed ashore and afraid to dive back in again.
“Since when did smoking become a deal breaker?!”
He cried, not so much to me as the entire world around him, sounding not woeful but more like he was looking across mountains mid-sunset having a vague epiphany.
I found myself admitting (highly unsupportively) that smoking is in fact, for me, a bit of a deal breaker. You only have to look at my line up of lad history to see that although they may all have enjoyed revelry like Russell Brand enjoys...well more revelry, none of them have smoked and they have all taken good care of themselves. “Soz mate, hate to agree with the enemy...”
I have other deal breakers. Jeans. A man must wear good fitting jeans. And with confidence. Any sign of ankle-swinging, a lack of grip on the rear or an excess of cling on the thighs and they’re off (the boy, not the jeans). In fact, it’s less a deal breaker and more a pre-signed contract if he dons his D&G’s with a swagger. I would probably go out with Keith Chegwin (a.k.a most irritating man on planet) if he rocked up in some stunning Levi’s and a dapper man scarf...
But it does make you wonder doesn’t it. I mean, everybody’s deal breaker is surely different and the chance of one arising is so high. As Jude Law's Alfie sums up 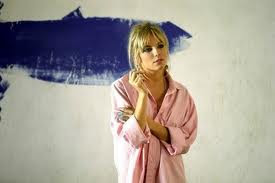 So is smoking a universal deal breaker for non-smokers? Are non-smokers a big red cross for nicotine addicts? What else is my friend going to have to keep on the DL for fear of scaring future potentials? Do we need to worry that the fact we have a grease addiction to hand cream will put them off us ever getting near the buttons of their Armani shirt? Should we be concerned that if we casually decide to go back to highlights it will send him running for the peaks and dropping us off at the local salon on the way, armed with paint-stripper? Will our bright lipstick see them exclaiming 'it’s not you, it’s me, I just hate L’Oreal....'?!
Chandler Bing consider this when he cries "what if I've found her, but I dumped her because she pronounced it 'supposably?" 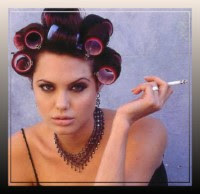 You can go to the gym 80 times a week and get a Cameron Diaz body, you can endure collagen for Angelina's lips, you can eat blueberries until your skin glows brighter than Gunther’s hair*, you can move continents and casually camp outside George Clooney’s house reading all his favourite novels until he notices you, but you cannot change the fact you like pineapple on your pizza and enjoy One Tree Hill (ahem).

So yes, dear friend, it is a hazard zone and just as you think the deal is indeed sealed, there are a zillion triggers that could come along and prompt an apologetic call from their lawyer. But luckily for you, shopping for better offers is 99% of the fun, so just keep browsing. And don’t you dare go below the asking price!* Hopefully highest meaning literally if you’re anything like me and fall for the tall** Gunther from Friends in case there was any doubt or any other Gunthers I may have been referring to
Posted by Hannah Ruth at 8/27/2010 03:09:00 pm